Family Went On A Camping Trip To A Remote Australian Island, But Were Suddenly Surrounded By Big Carnivorous Crabs - Text From Dog
Spread the love

A family trying to have a camping barbecue on a picturesque Australian island got unexpected visitors – tens of huge robber crabs surrounded them. The vicious-looking animals, also known as coconut crabs, can reach three feet in length and have a great sense of smell.

As the unsuspecting family enjoyed their freshly cooked barbecue while camping on secluded Christmas Island, off Western Australia’s far north-west, the crabs gathered around them searching for food. Despite their frightening appearance, the crabs are completely harmless, but (as their name indicates), they often steal food from campsites.

The family made a series of fantastic photos, and they show more than 52 of the crabs impatiently awaiting an opportunity to get some leftovers. 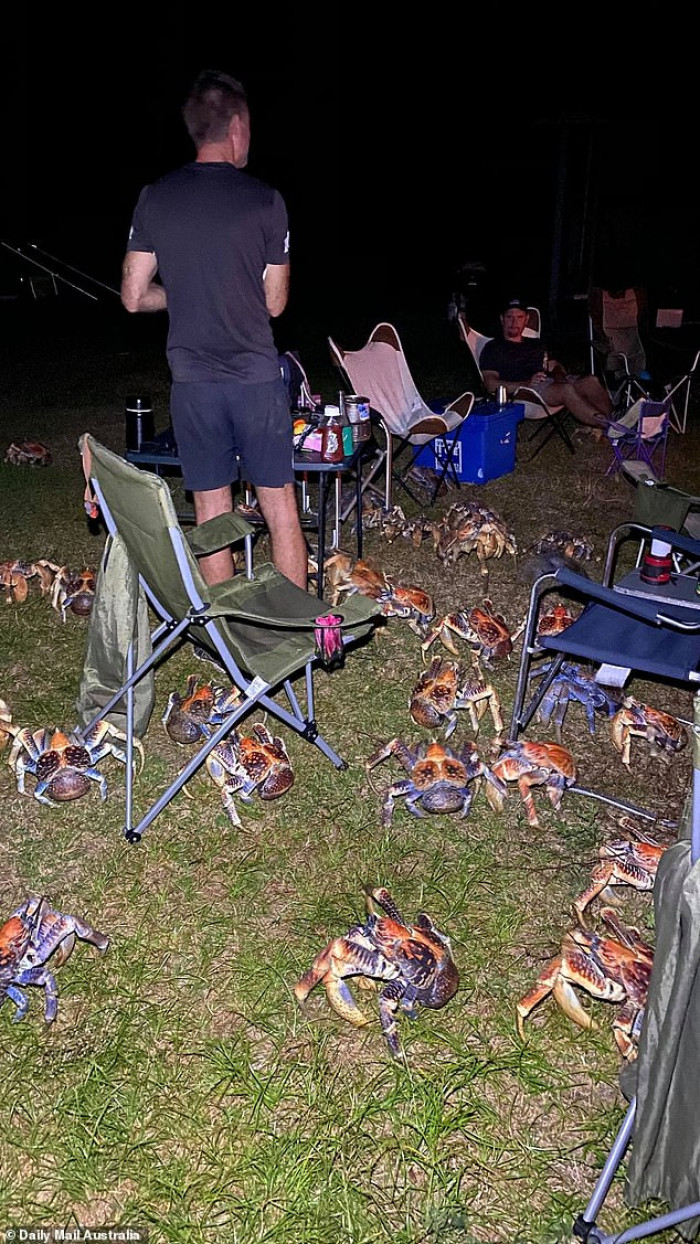 Winter McKendrick looked calm as the huge crabs surrounded her. 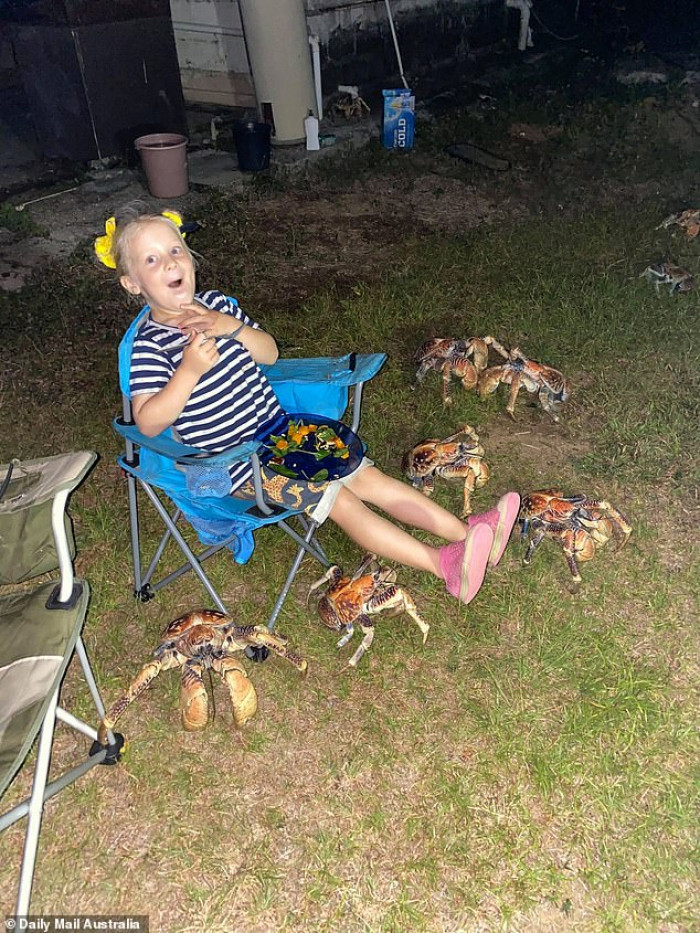 A camping trip barbeque became a struggle to keep 50 robber crabs away from food. 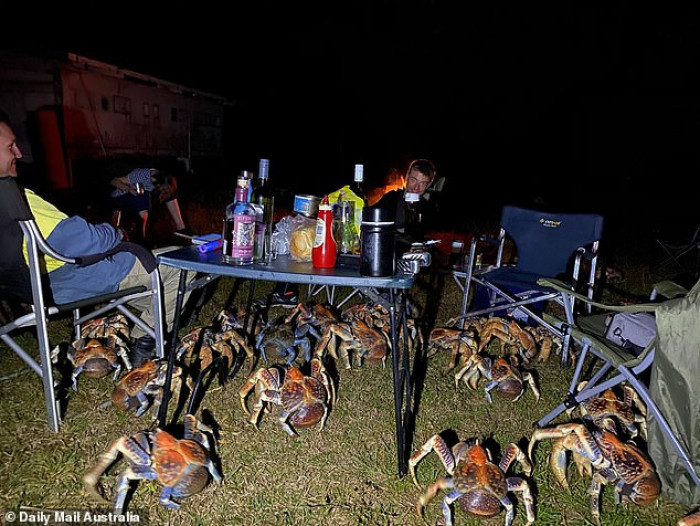 Winter McKendrick, a little girl from one of the other families on tour, looked pretty calm as the huge crabs surrounded while she ate her supper. One courageous crab was photographed climbing the side of the table to get better access to the food…

Amy Luetich lived on Christmas Island for a few years with her family, and they were camping with few other families in the jungle part of the Island called Grants Well. “We have camped in that area a few times, and we have never seen so many robber grabs,” Mrs. Luetich told the reporters.

She said there were near 20 under a tree when they arrived. “But as soon as we started cooking, they swarmed around us. My son counted 52 of them,” the deputy principal described.

One of the crabs scaled the table. 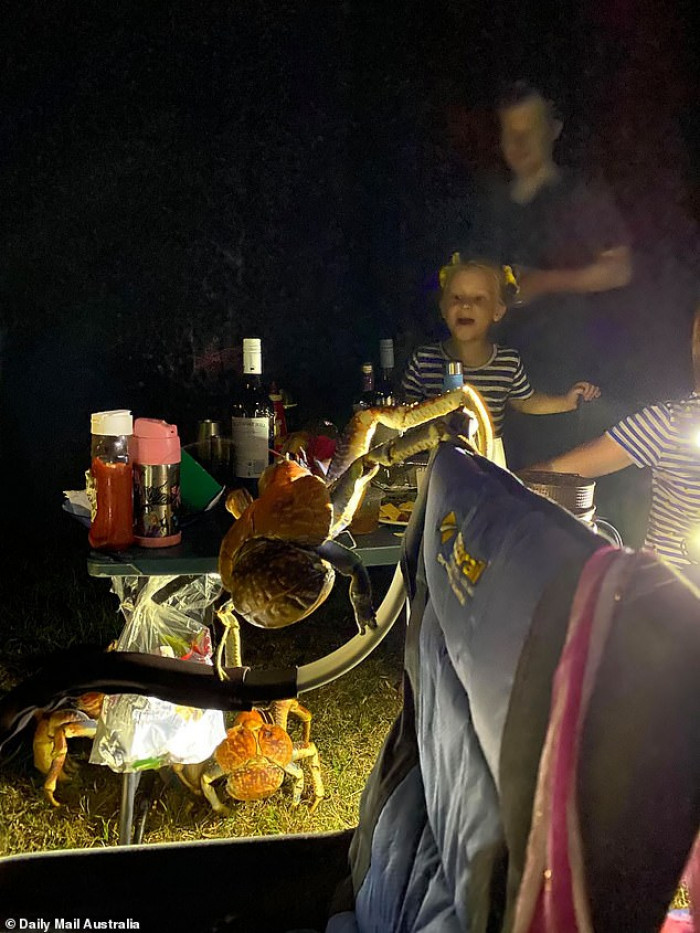 One of the crabs even climbed on top of the barbecue. 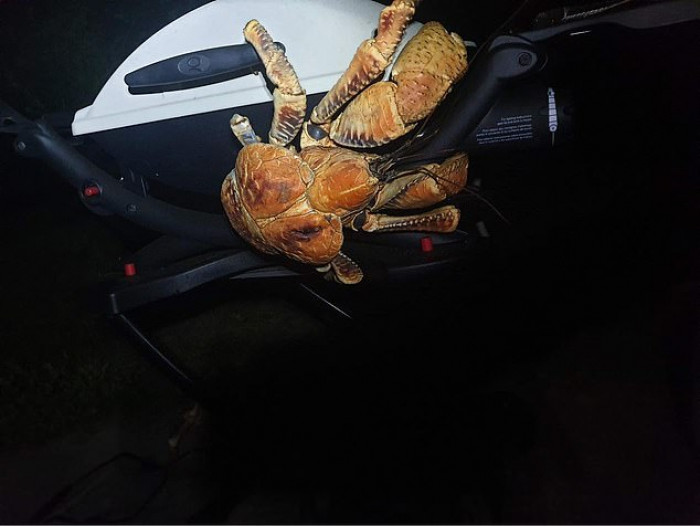 Robber crabs got their name because of their habit of stealing things from campsites. 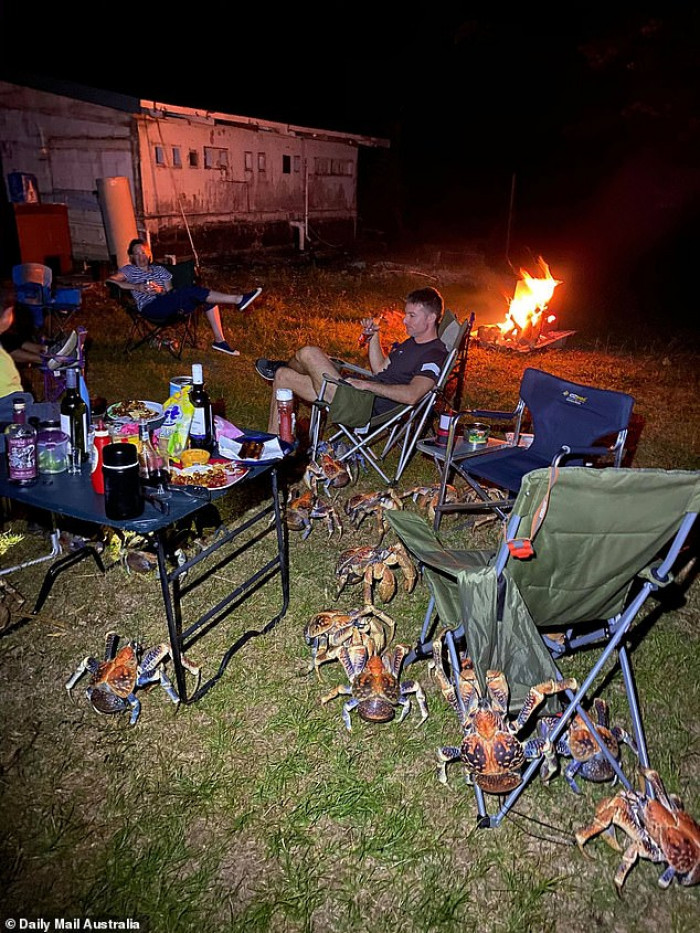 Jacob Tiernan-Luetich had an important job – he was assigned to keep the giant crabs away from food. 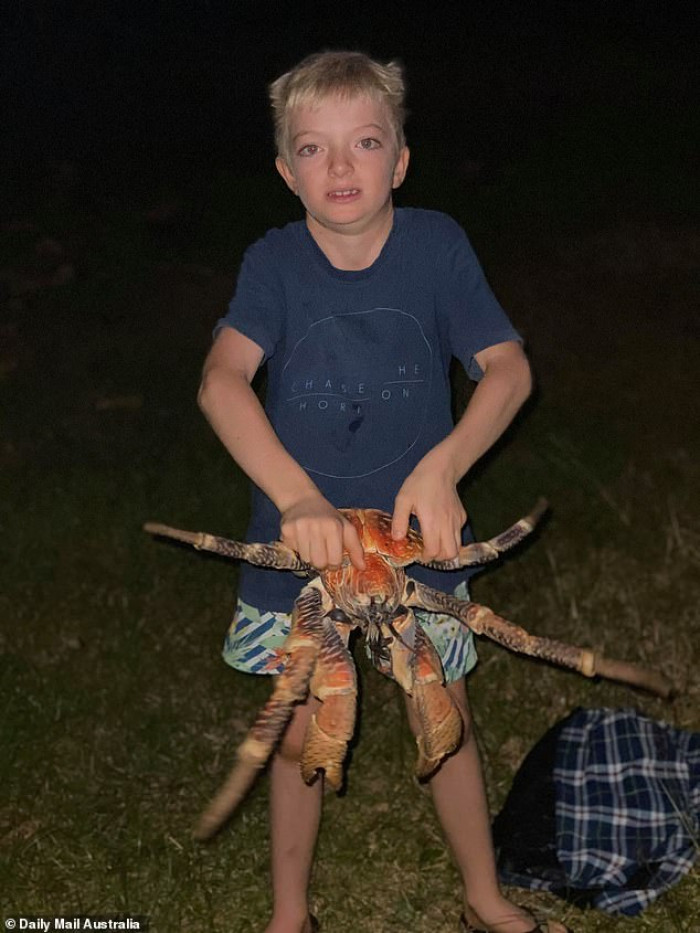 “His job was to pick them up and move them away from where we were eating. He was loving it.” She explained that they are used to seeing robber crabs because they had lived on Christmas Island for a while.

“Then they started to climb up to the table, and another climbed onto the barbecue,” Mrs. Luetich said. “We kept our tents away from where we had eaten, but one of the families said the whole night they could feel one tapping on the outside of their tent.”

The photos were shared on the Christmas Island tourism Facebook page., with a caption: “Robber crabs behaving badly! A couple of local Christmas Island families had a few extra mouths to feed at their BBQ over the weekend.’

“Coconut crabs have an incredible sense of smell, and for slow-moving creatures, they sure move quickly when there’s food around.”

People soon started commenting on the post, with many describing their own encounters.

“Lost a sneaker to these buggers one night. Couldn’t find a one-legged robber crab,” one person kidded.

Another person said: “They are like puppies. We hung out on Dolly Beach, feeding them coconuts. So cute!”

But some people weren’t so thrilled with these crabs. “This makes me feel uncomfortable,” one person commented.

Christmas Island is home to the largest population of robber crabs on Earth.

The robber crabs are tasty to eat, somewhere between a mud crab and a lobster. Although they are a delicacy with aphrodisiac traits across the Pacific Ocean, they are a protected species in Australia and can’t be hunted.

Visitors are warned that robber crabs can move fast when they smell food. Tourists are advised to hang their food on a tree – especially on Dolly Beach.

Drivers are also asked not to drive fast because they might run over a crab. Visitors are informed that robber crabs are “protected and respected” on this island. 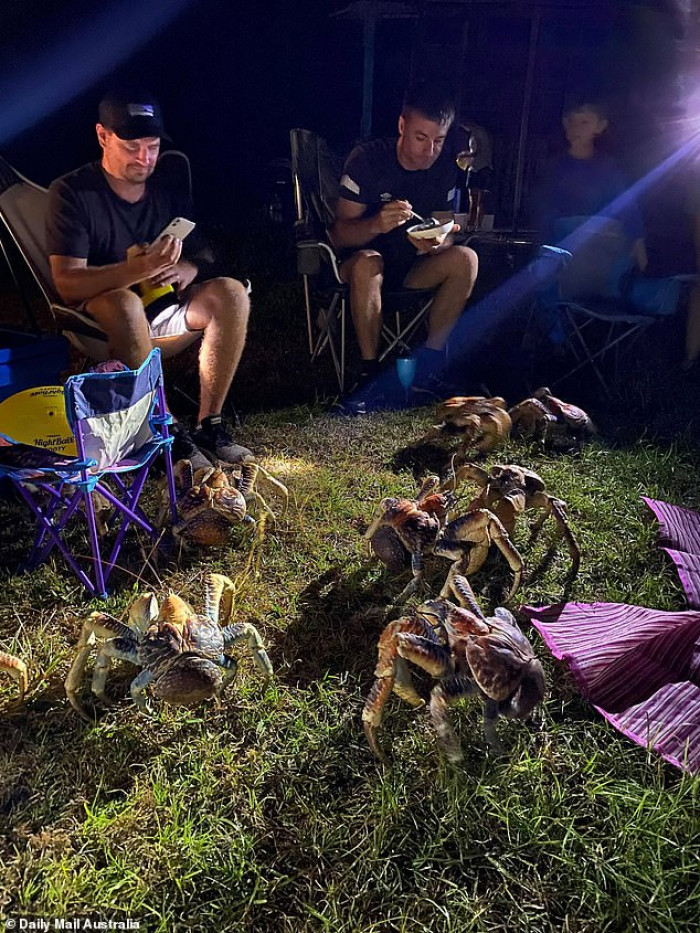 Robber crabs are the biggest land crustacean in the world. 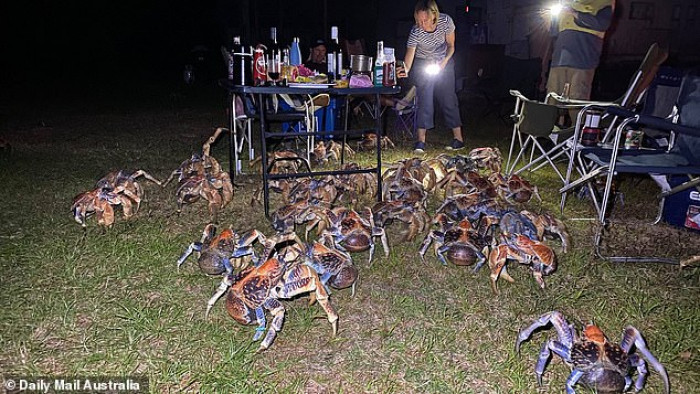 Singapore previously owned Christmas Island, but they transferred ownership to Australia in October 1958 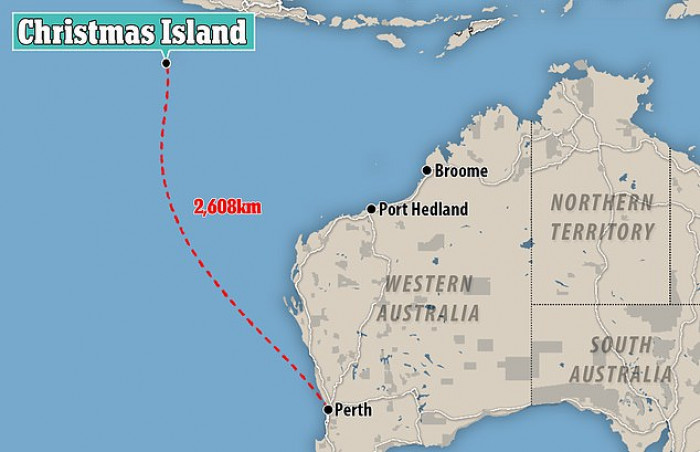 Twenty-five million red crabs are located here. They stay on land until they move to the ocean to reproduce, and then the newborns return to land.

One other distinguishing feature of the island are whale sharks that hang around.