Friends are not just there to keep us company and to have someone to go out with. They are there to help us and lift us up when we are down. But how much is enough?

When does friendship turn into a codependent relationship? Our OP today just tried to help a friend through a rough patch. She welcomed her into her home and allowed her to live rent-free.

Now, that was 18 months ago, and her freeloading friend doesn’t seem to think that the benefit of rent-free living is enough. She wants more.

OP says: “My friend(A) has been living with me for free for the past year and a half because the building she lived in was condemned. I own the house we live in. A has anxiety and wants to get a dog. I told her that no dog would be in my house, and she said that was unfair.”

OP was clear about dogs in the house, but her friend wouldn’t budge.

“I still said no, because I am not letting a dog in my house. Now she’s saying that I should let her get an ESA, because her doctor said she needed one, and I’ll barely notice it’s there. The answer is still no, if she wants the dog she can move out.”

OP sounds serious, but not serious enough. Her friend continues to pressure her, and now she asks Redditors to advise her.

She is letting her friend live rent-free in her home. And it has been going on for a while – 18 months. Now her friend wants to get a dog

OP said no, but her friend insists she needs an emotional support animal

OP doesn’t like dogs, and wonders if she is the AH in this situation

This can also happen:

Redditor with a similar experience said: 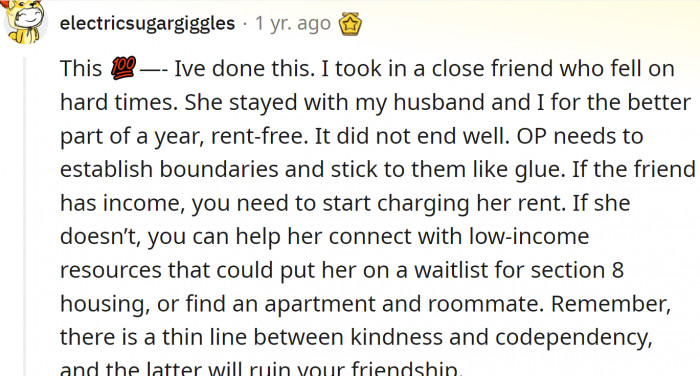 Well, some had to…

What is she going to do if the dog gets sick? 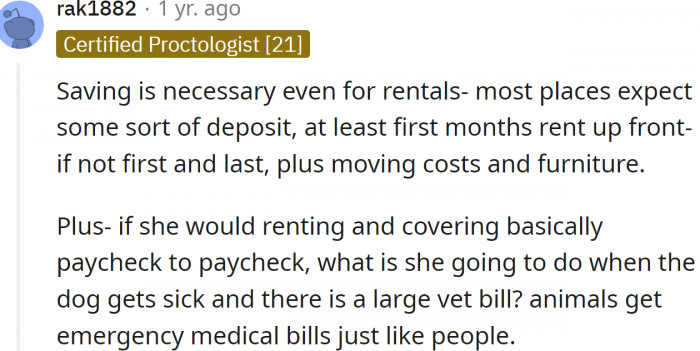 Don’t bite the hand that feeds you

Does she have income at all?

That girl is a leech.

Well, what do you think? Should OP budge and let her friend get a dog? After all, she needs it – it is an emotional support animal. Now, this term is pretty vague and basically can mean anything.

Aren’t all pets emotional support animals? There is no training required for an animal to be designated ESA. They are not like service or work dogs that are trained for a specific purpose.

People are taking advantage of that and forcing landlords to accept pets. It’s enough to declare that the animal is an ESA, and they have to accept it (as long as it is not harmful to other residents).

We wouldn’t be surprised if this entitled freeloader tried to use that to her advantage.