Woman's Neighbor Assumes Their Akita Dog Is A Stray, And Trespasses Into Her Property To Take The Dog - Text From Dog
Spread the love

Losing a dog is one of the worst experiences one can ever have. Fortunately, there are ways to be reunited with a lost dog.

Experts advise dog owners to call their shelters immediately after finding out they’ve lost their dogs. If you can stop by in person or show them pictures of your dog, all the better.

Others would suggest getting the dogs microchipped. ID tags are nearly useless because the collars can come off.

If someone stole the dog, they can just easily dispose of the tags too. Microchip gives the dog a permanent ID that will never get lost.

But what if the dog that was missing turns was in truth, stolen? This is what a redditor went through in her search to find her lost dog.

The 21-year-old lady owns a 12-year-old Akita named Mickey. The dog has been with her for his entire life.

That’s why when he suddenly disappeared, the owner was so worried. He’s in a gated residential neighborhood, so where could he have gone to?

After her search, she finds out that a neighbor of her, who is new to the area thought that Mickey is a stray. That’s because Mickey walks around the neighborhood together with his owner unleashed.

You can only imagine how angry she felt after finding out was not missing, but in fact, stolen. To make matters worse, the Mickey was given away to a friend.

The new neighbors did not know that the Akita has always been walking with his owner unleashed. 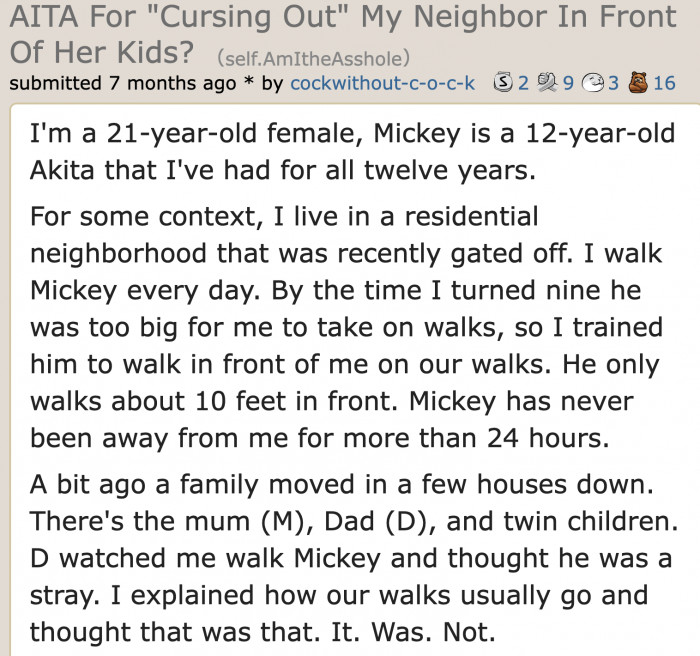 Mickey was close to being found 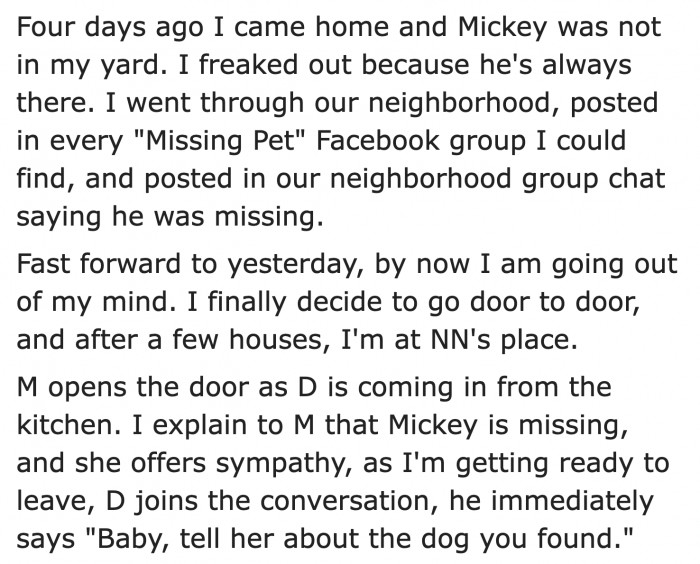 That’s what you call stealing. 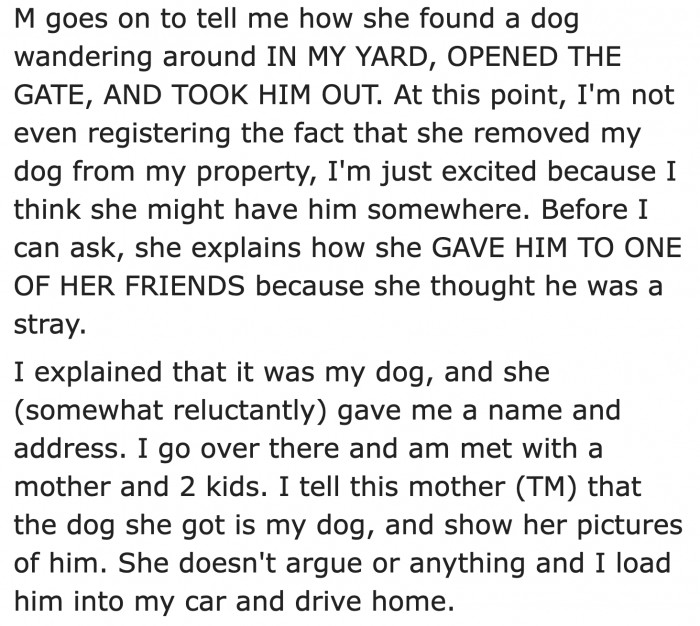 The moms are now bad mouthing her, making the original dog owner look like she’s the bad guy in the situation.

But what made things worse was that she yelled at the mom who received the dog as a gift. This is where Reddit became split. 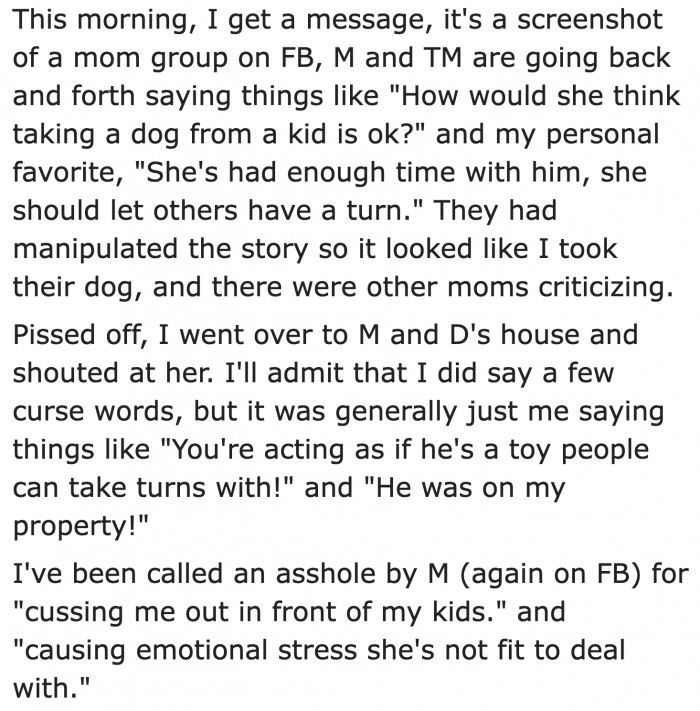 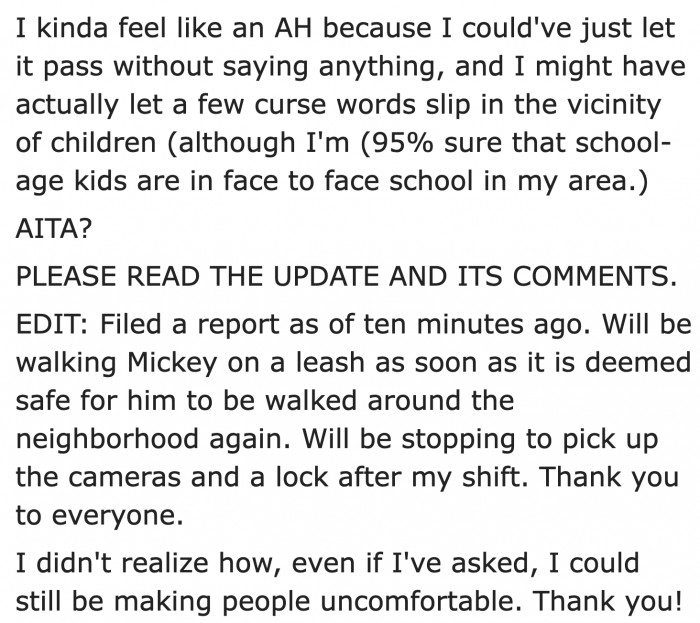 Some redditors commented with solutions.

Others believe that she could press charges against the neighbor who stole dog.

If she pushes through with it, the Facebook posts are indeed good evidence. This one is such a nice idea!

These moms are just unreasonable.

The original poster also got lectured by a redditor. 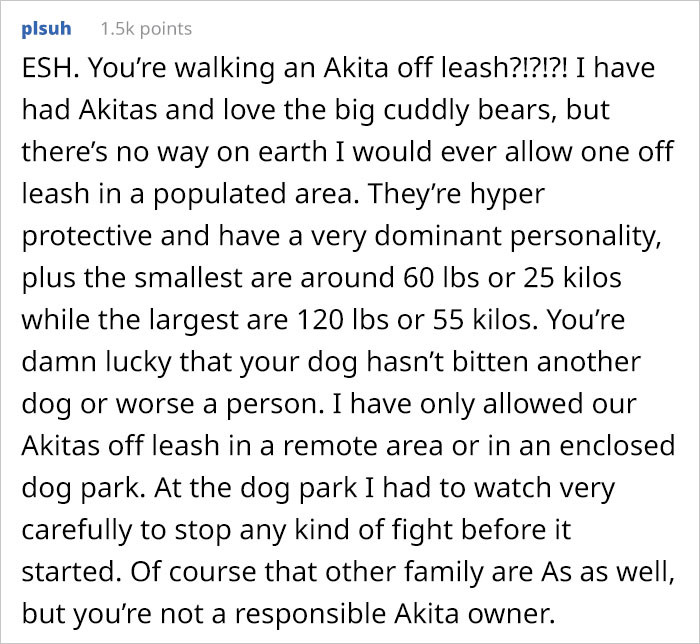 While some redditors consider everyone sucked in the situation, the original poster was still given tips on how to go about it moving forward. 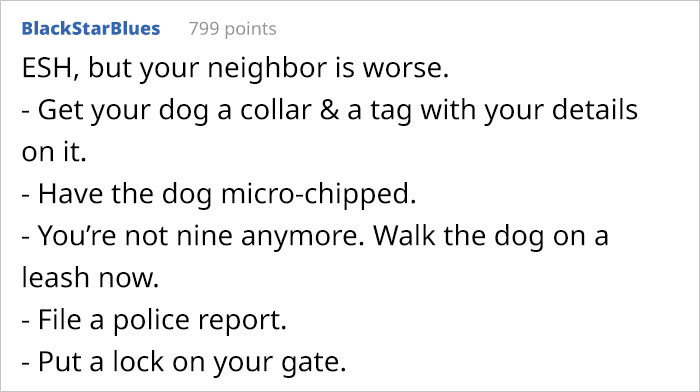 With a microchipped dog, no one else can claim that the dog is theirs. 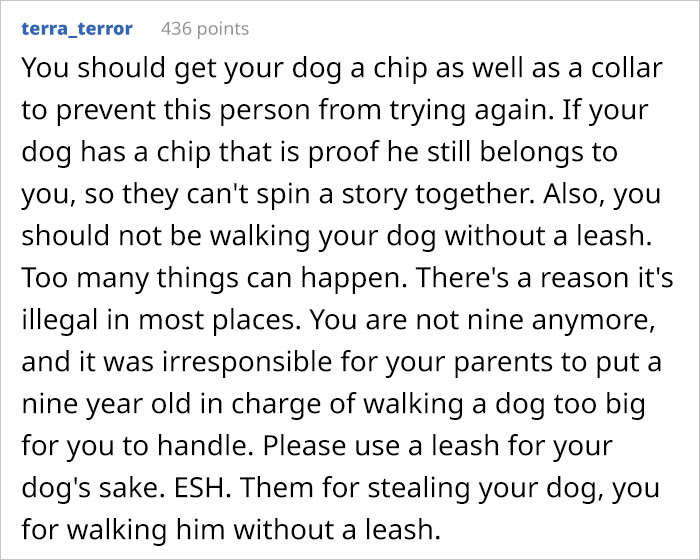 Redditors agree to file a police report regarding the stolen dog. 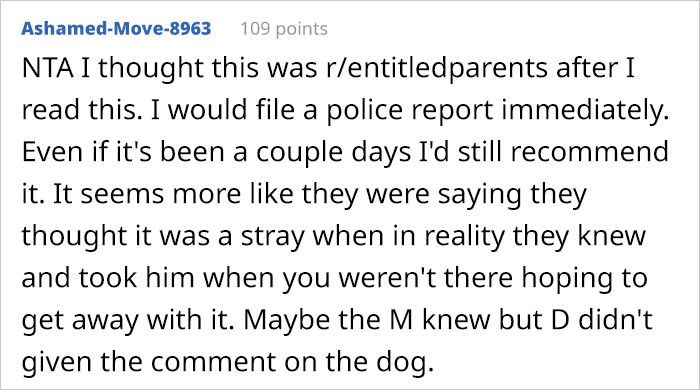 The original poster further explained her side.

The dog was professionally trained to walk with her. Everyone in her neighborhood has no problems with the Akita walking around the area without a leash. 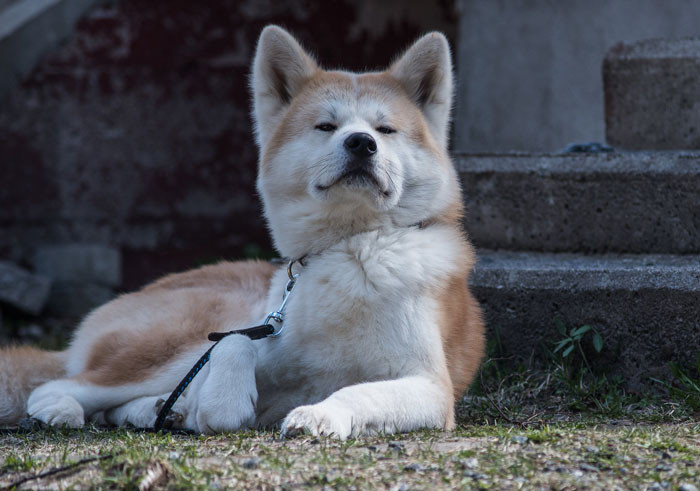 After much consideration, the original poster decided to file a police report.

She also explained that there’s usually someone who watches over Mickey while he frolics outside. But it was one of those days when he was just playing alone outdoors.

Cameras will be set up so that she’ll immediately see who took her dog. After everything that happened, the owner decided to microchip mickey as well. 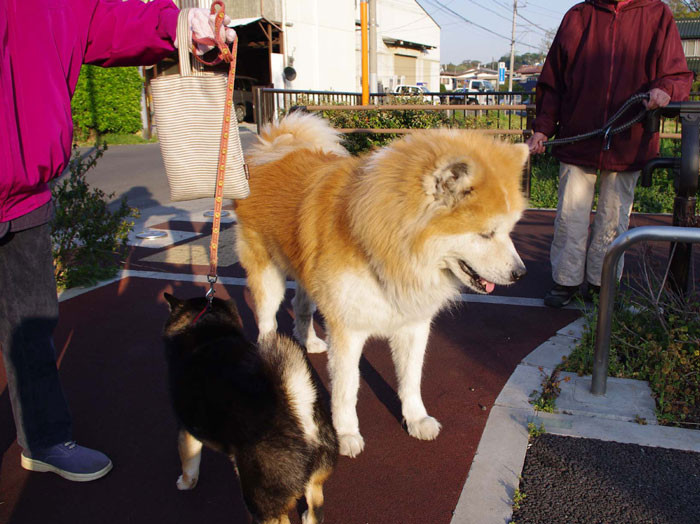 Reddit may have been mixed in deciding who’s the one at fault here.

After all, both sides did something unreasonable. But the good this is that the owner learned something out of it.

Now, she has decided to take the necessary steps in protecting her dog. She’ll have him on a leash moving forward.

The dog will receive a microchip too. With these steps, the lady who stole the dog will never get away with her deeds.